I have been a fan of the Brontes since my school days, from the moment I first read Jane Eyre I fell in love with all their books and any time there is a drama or film version about this family I make sure I watch it. This was one of the very reasons for my visit to the parsonage last week, I watched “To Walk Invisible” over the Christmas time and started planning my visit to Bronte country. It sounds silly to say, I wanted to walk the moors like Charlotte Bronte and gain my own inspiration!

Bronte Parsonage Museum is located in Haworth, West Yorkshire and you can access it by car or train. I chose to drive, from Newcastle its 2 hours 30 minutes with the first hour or so being on the A1 motorway the rest of the journey is around country roads, towns, villages and over the moors. Google maps was definitely my friend. On arrival you can park in the council carpark in front of the parsonage, as the museum is within Haworth village and everything is in walking distance.

The tickets are valid for 12 months from date of issue, so you can enjoy as many trips here as you wish in the year!

The Bronte’ Parsonage is situated in a picture perfect setting, within the scenic village of Haworth and at the edge of the impressive Yorkshire moors. This was the home of the “world’s most famous literary family” and the very place Charlotte, Emily and Anne Bronte were inspired to write their books, which are now some of the greatest novels ever written in the English language. 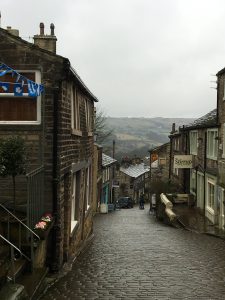 Once I had bought my ticket I headed straight to the house and spent some time outside in the front garden taking pictures and looking up at the home letting my imagination run wild. In front of the house is the local church and it’s graveyard. The family were buried in a vault under the church itself, not in the grounds. Everyone in the family except Anne Bronte lie here, as she died in Scarborough and is buried at St Mary’s church there.Two of their servants are buried in the church yard, Tabby and Martha Brown.

As you enter the house you walk into the entrance hall and information on the family arriving here  in 1820 when Patrick Bronte was appointed Perpetual Curate of Haworth Church, the signage around the home is excellent and well positioned. The actual paint on the walls and wall paper have all been reproduced from scientific analysis to exactly what it would have been at the time the Brontes lived here. You are kindly asked as a visitor of the museum to not take photos with the flash on as it will damage the fabrics within the home.

The first room you enter is Mr Bronte’s Study, the room directly opposite is the Dining Room and the two other rooms downstairs are the Kitchen and Mr Nicholl’s Study, Charlottes husband. Mr Bronte’s Study was a room he carried out his parish business in and gave the children lessons in literature, politics, art and music, as education was important to Mr Bronte it had enabled him to ‘advance in the world’. The Dining room holds the key item in the whole house, the dining table in which both Jane Eyre, Agnes Grey and Wuthering Heights were written on! It is a proper writers table and there is an E carved into the tables surface. Mr Nicholl’s study was used to carry out his share of parish business, as he was Mr Bronte’s curate, which was a clergyman. And lastly the Kitchen which was the scene of the young Brontes gathering around the fire listening to their servant Tabby’s ‘dark tales of the Yorkshire Moors’ and later on Emily became housekeeper and helped with the kitchen and baking bread.

As you walk up the staircase there is a painting of the three girls and on the other side a big grandfather clock, which is a mahogany long case clock that was wound nightly by Mr Bronte. Upstairs their are five rooms, the Servant’s room, Charlotte’s room, Children’s study, Mr Bronte’s bedroom and Branwell’s studio. Servant’s Room was used by their live in servant, they always had one. Tabby Aykroyd served them for 30 years, a local lady. Martha Brown came in to assist Tabby and remained there, hence why they are buried in the churchyard, very close to the Parsonage garden wall. Charlotte’s room was previously her parents room and then her aunts, she shared this room with her husband until her death in 1855. This is a large room filled with one of Charlotte’s dresses in a glass cabinet and lots of personal items such as her nightcap and shoes. In the Children’s Study, this room was for the Bronte children to read and write, let their imaginations run riot. It is a small room, Emily is believed to have slept in here in her last years and there are pencil drawings on the left hand wall which are faint that may have been drawn by the Brontes. Patrick Bronte’s room displays a large bed that was reproduced based on a drawing, as no beds survived. All other items were used in the Parsonage. Mr Bronte brought Branwell into this room when his alcohol addiction made him a danger to the family and he watched him.

Branwell’s room is a new installation for 2017, showing you the chaotic mind of this man and giving you a greater understanding into him and his room. This is the work of Simon Armitage and the production designer from ‘To Walk Invisible’ Grant Montgomery, using research they have recreated the walls, floor surface and made it much more authentic. You hear his poem ‘The Struggles with Flesh with Spirit’ being read as you wander through the room, looking at his drawings and general untidiness of the studio. It definitely makes you think more about Branwell and his issues, you have a real feeling of sympathy for him. This is the darkest room in the house and it adds to the feeling of Branwell’s troubled mind.

You enter the museum’s permanent exhibit after you leave Branwell’s studio, Genius: The Bronte Story. This gives you a greater insight into the whole family history and story, if you knew nothing you would leave here knowing a great deal about the Bronte’s lives. The displays are refreshed each year, so there is always new things to see! As you leave this exhibit you come down the stairs to the shop and a new collection by Simon Armitage where he curates a series of 11 objects from the museum, to explore Branwell Bronte’s colourful history called “Mansions in the Sky”. As this is the year of celebration for Branwell Bronte as it is 200 years since his birth. This will be showcased till next February.

I throughly enjoyed my visit around Bronte Parsonage Museum and the grounds, I just wished the weather had been better as I wanted to walk the moors like the Bronte’s did. However I am going to return in the summer and do so. I would throughly recommend a trip to the Haworth and the Parsonage, whether you are a fan of the Bronte’s or not. Everyone whatever age will enjoy a visit here! On leaving I bought a copy of Villette from the shop as I haven’t read this book, my visit has definitely reignited my passion for the Bronte’s.

2 thoughts on “‘Popping into the Parsonage’- Bronte Parsonage Museum”