I have just returned from another trip to Marrakech, a place that holds a special place in my heart. From the first time I visited in 2012, I knew the ‘Red City’ had a magic and mesmerising feel to it. Five years on and many visits later, I am still finding new places to explore and enjoy in Marrakech.

This blog is all about where you MUST visit if you are going to Marrakech. I want to share with you all where I visited this trip, giving you an insight into each place in the hope you will visit yourselves.

Le Jardin Secret, Ben Youssef Madersa and the Bahia Palace. All are in walking distance of the medina, if you are staying in a riad or hotel close by, otherwise you can get a taxi or shuttle bus from your resort to the Jemaa el Fna Square and walk from there.

Located on 184 Rue Mouassine, Le Jardin Secret is one of the largest and most ancient riads in the Medina of Marrakech and is open every day to visit. It’s origins date back to the Saadian Dynasty more than 400 years ago. Rebuilt in the 19th Century. In 2008 an idea came to restore and open the place to the public, after 8 years this plan came to fruition and Le Jardin Secret opened its doors in 2016. From the moment you enter this beautiful riad you are wowed by its natural beauty and size, it is very large in size as it homes the riad itself, which is a traditional manor house with not one but two fabulous gardens. Which are areas of peace, quiet and serenity protected from the outside by it’s high windowless walls. 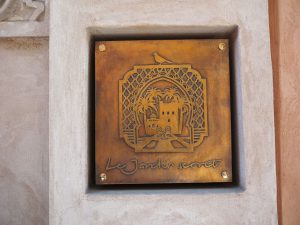 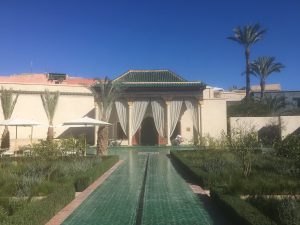 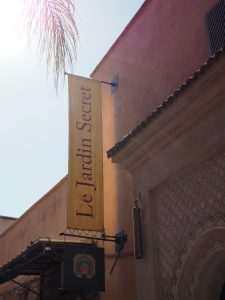 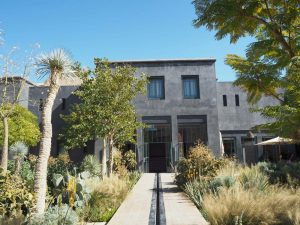 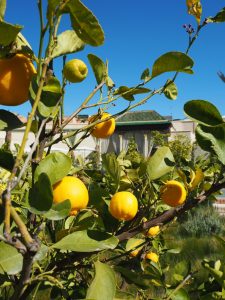 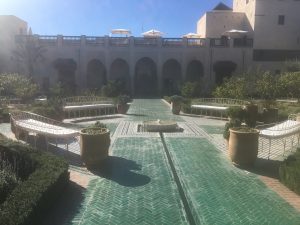 The two gardens are named the Exotic and Islamic gardens. In the Exotic garden you will find plants and trees growing side by side from 5 continents, coming from climates similar to Marrakech. In the Islamic garden, this is split into 4 quarters in reflection of a traditional Middle Eastern garden, to symbolise an idea of an earthly ‘paradise’ described in the Qur’an. Water is the main element of Arab-Muslim gardens, hence why the fountains in the centre of the riads are the ‘real beating heart’ of the house. The water source that flows from the Atlas Mountains into the garden, was the work of the first inhabitants of Marrakech who used a 1000 year old technique of underground channels and the hydraulic system, allowing the water to be distributed throughout the riad. It still works today! 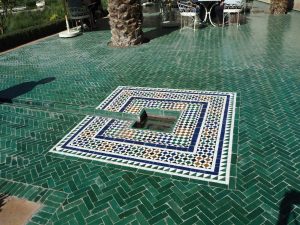 Le Jardin Secret is one of kind, as it has a qubba along with a tower standing beside each other. These buildings symbolise ‘the embodiment of power’ of the tribal chiefs, judges and chamberlains who were owners of the riad. Today they are very rare in Marrakech. 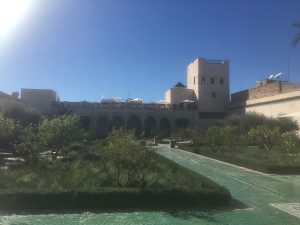 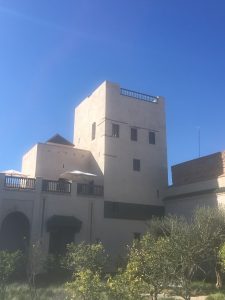 I throughly enjoyed wandering around the gardens, taking a seat and simply enjoying the view and taking pictures. There are cafes, one in the Islamic garden and one on the terrace, where you can get a lovely glass of mint tea taking in the glorious views!

After a break for some mint tea on the terrace basking in the winter sun, I took a tour of the tower.  You can buy another ticket to enter the tower, as promised when you walk to the top the views of the Atlas Mountains are fantastic. The guide points out all the areas of interest in Marrakech and answers any questions you may have.

This was an Islamic college named after Almoravid Sultan Ali Ibn Yusuf, who himself expanded the city and its very influence on a large scale. Once the largest Madersa in Morocco and surely the most splendid, it was founded in the 14 th Century by the Marinid Sultan Abu al-Hassan. The college consisted of 132 dormitory cells that all cluster around a courtyard, that is richly carved in cedar, marble and stucco (also known as render). Carvings are of inscriptions and geometric patterns, such as stars and petal designs in  the tilework. It is thought to have housed up to 900 students. In 1960 it closed for a refurbishment and reopened by 1982 to the public. Ben Youssef Madersa is located in Kaat Benahid and open daily. 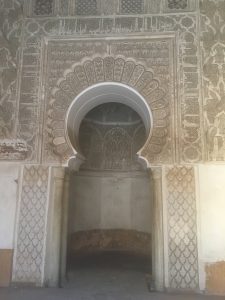 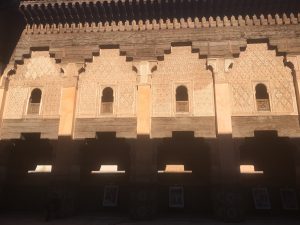 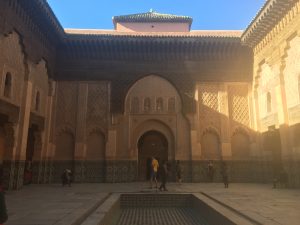 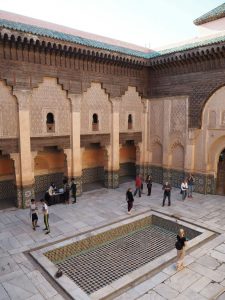 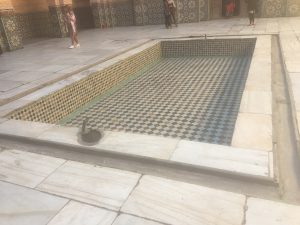 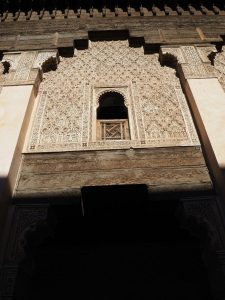 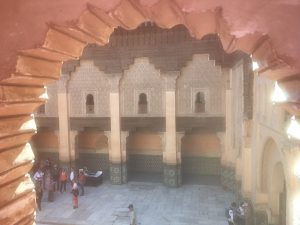 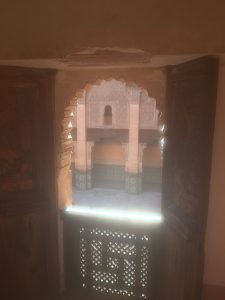 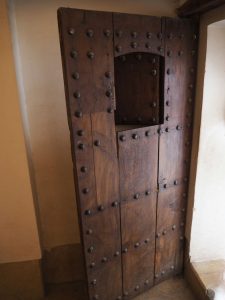 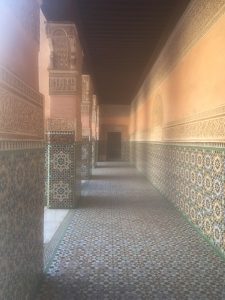 I throughly enjoyed visiting Ben Youssef Madersa and I was in awe of the carving work. The thing that struck me the most was the saying by the name, you see on entry. Translated it means “You who enter my door, may your highest hopes be exceeded” which I thought was positive and lovely. Take a trip for yourself! 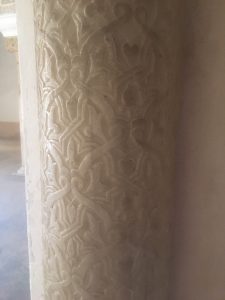 The Bahia Palace is located on Rue Riad Zitoun el-Jehid. This is a palace with a set of gardens,  not far from the hustle and bustle of the medina. Built in the late 19th Century, the intent was for it to be the greatest palace of all time. The name Bahia means ‘Brilliance’. The aim of the palace was to capture the essence of both Islamic and Moroccan style and it was set up by Si Moussa grand vizier of the Sultan for his personal use. Bahia Palace boasts a large courtyard, beautiful fountains, amazing tilework, ornate wall carvings and the natural beauty of the gardens. This is a great spot to find some peace and quiet, as it is very tranquil and it lets you marvel at the traditional moroccan craftsmanship. Once home to a harem, it is open daily for tours. 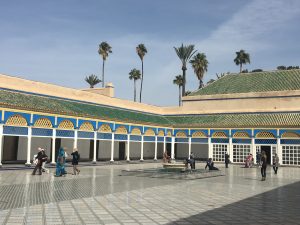 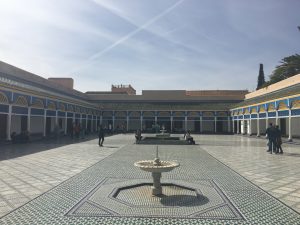 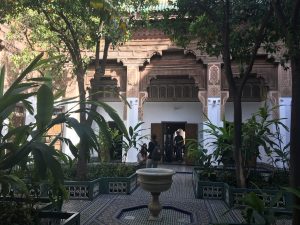 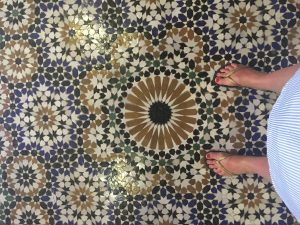 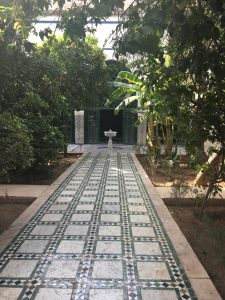 You can wile away a couple of hours in the palace, going from room to room, exploring the gardens and taking pictures of the tiles, with their changing designs. One of my favourite things when visiting Marrakech is seeing all the different tiles in places, the colours and patterns! 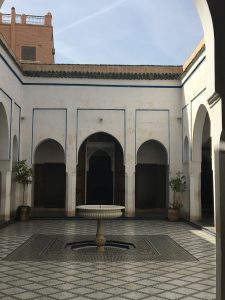 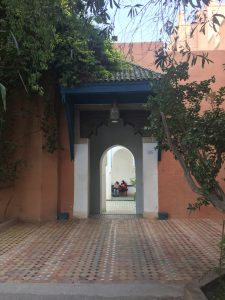 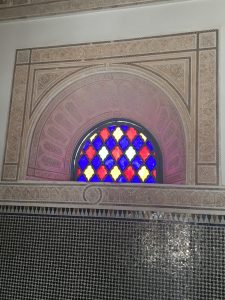 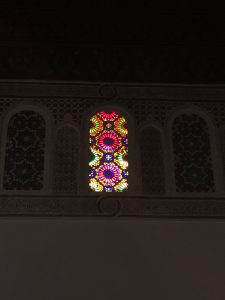 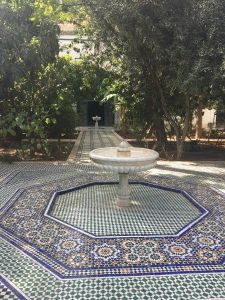 I hope you get to visit these interesting places of history and natural beauty whilst in Marrakech, as you wont be disappointed. Happy Travels!