Merzouga is a village in the Sahara Desert in Morocco, on the edge of Erg Chebbi 50km long and 5km wide and sand dunes that reach up to 350m high.

Day 1 Marrakech – High Atlas – Ait ben Haddou – Ourzazate – Dades gorges (Dinner included )
Depart Marrakech at 7am, passing through the Atlas Mountains where at 8.30 we will take a short stop for breakfast in Tadart Village. After we will drive to ‘Ait Ben Haddou Kasbah’ where we will enjoy an extended stop to explore The Ksar of Ait-Ben-Haddou on the World Heritage List of UNESCO since 1987 and where many movies were filmed (Lawrence of Arabia 1962, Sodom and Gomorrah 1962, The Man Who Would Be King 1975, Time Bandits 1981, The Jewel of the Nile 1985, The Mummy 1999, Gladiator 2000 and Alexander 2004) After the visit of Aït-ben-Haddou kasbah we will drive to Ouarzazate, which is the Moroccan capital of cinema, stopping here for lunch. Afterwards we will drive to the Dades Gorges where we will spend the first night in the hotel.

Day 2 Dades – Todgha gorges – Tinjdad – Risani – Merzouga – Camel trek (Dinner & breakfast included)
After breakfast we will drive to the Tinghir city where we will explore the Todra Gorge and then into Touroug village where we will stop for lunch for an hour. After lunch passing through Arfoud and Risani then on to the Merzouga desert. Then on to your hotel where you will be able to relax by the swimming pool and drink Berber tea. Around 5pm we will take a camel ride for an hour into the Berber camp, arriving at around 6pm. Drink Berber tea with nomadic people in the camp and after we will go over the dunes to watch the sunset. Then the night will start with dinner in the camp with traditional music around the fire . Overnight in your private Berber tents. 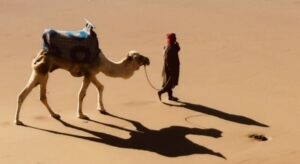 Day 3 Merzouga – Draa Valley – Agdez – Tadart – Marrakech (Breakfast included)
We will wake up early in the morning to see the sunrise and after we will ride camels back to Merzouga to the hotel for breakfast and taking a shower. After we will begin our journey back to Marrakech.