I don’t know if it was because I hadn’t actually been on an aeroplane until I was 11, but I am absolutely petrified of flying.  I would class myself as an alpha male, 6’2” tall, 16 stone and I am pretty confident it most situations, until I am put inside a metal tube that travels at 500mph at 36,000 feet in the air.  Likened to a white B.A Baracus “I ain’t gettin’ in no plane fool”, but as a fool I always end up in the metal tube being shown how to fasten my seat belt, then the obligatory light and whistle to attract attention…

It turns out that a plan of curing this fear had been put in place by the big fella when I met my future wife Samantha.  Sam had been exposed to the world of travel from a baby and had been all over the world including the Seychelles, various parts of America, Kenya and Bali to name but a few…. I had been to the Costa Del Sol in Spain and Ayia Napa in Cyprus. This showed when on one of our first flights together Sam would be browsing the in-flight magazine and I would be gripping on to the seat in front, praying and doing some deep breathing also know as hyperventilating.

After getting her degree Sam landed a job for what is now considered to be a Times top 100 employer…To say they treat her a lidl inappropriately is an understatement, they made her life hell for the time she was there.  But it made her a stronger person and put her on the path she was destined to be on as a travel blogger.

My course of treatment for my fear of flying was doing well with holidays to Majorca, Tenerife, Turkey, Dubai and a few others. I then discovered they were just mid distance training runs preparing me for our wedding…in Hawaii.  A one hour Newcastle to London flight, an eleven hour London to Los Angeles flight and finished off with a six hour LA to Maui flight.  If that didn’t cure me I don’t know what would. Yes I do, medication from the doctors and half a dozen gin and tonics.  In fairness the flights weren’t too bad but I always expected my next flight to be worse…The theory being the law of averages, If I have half a dozen okay flights then next one is going to be bad. Read Sam’s post Aloha! Destination Wedding

Samantha Owen became Samantha Owen-Stoddart (SOS) and few years after the wedding Sam pursued her passion for travel with her blog www.sostravel.co.uk She has since poured her heart and soul into making it a success.  I have supported her along the journey but didn’t realise what it all entailed.  We both had to be self taught in the way of WordPress, using trial and error and a lot of cursing at the computer, a few times I had visions of the Mac being thrown out of the bedroom window onto the lawn.  Social media has now become a part of life for at least 16 hours if not more of our day.  Again this has all been self taught and what is often a numbers game becomes a little bit of an obsession.  I call it “my blue light at night” as I often wake up in the early hours to see the blue light of an iPhone illuminating Sam’s face as she attempts to reply to every notification, advise which she took literally from Gary Vaynerchuk (Gary Vee), he also said that “if your eyes aren’t bleeding you aren’t doing enough” I’ve yet to see her eyeballs bleed but they’re not far off.

What were once holidays have strangely become work, even though we really enjoy our trips away the blog has become part of our lives and of course our holidays.  Sam cares deeply about her blog and is very passionate about giving advice.  She is buzzing when people take her up on advice and get back to her saying they did this or that. If it matters to her it matters to me, even though sometimes I am at the end of her frustration and rants about social media, traffic to the site, Instagram algorithms amongst other things.  I just keep telling her to do her thing and that it will come with time and constituency.  I have my own social media accounts and follow many of the blogger community. Sam has forged some great relationships with passionate likeminded people from around the world.  These people know who they are, they are positive and very supportive.  I have however come to understand that there are many who can be patting you on the back with one hand and stabbing you in the back with the other, unfortunately this is a consequence of people wanting to make money and money being their sole motivation for blogging.

The camera is never too far away, whether it be the phone camera, the GoPro or our Olympus Pen, we capture most activities we are doing.  Eating out in restaurants I just look at the waiter or waitress with a look to say just place it down there please, I will not be eating it for at least 5 minutes until the photoshoot is finished, funnily enough they must see plenty doing the same and without words they seem to know what I am saying.  The correct angle all other objects out of the way and hands off the table. We have the shots….I can now tuck in.

I have now become a weather expert.  I use many websites to study the weather and any areas of predicted turbulence I am likely to be flying through.  I don’t know why I look as it often makes me feel worse and the 24 hours before flights I am normally preparing myself mentally for take off, any bumpy patches en route and landing.  My go too research sites are www.weatheronline.co.uk and www.turbulenceforecast.com.  They are normally accurate and I often credit them in flight when we do hit a bumpy patch I turn to Sam “I told you it was going to be bumpy” as she takes one earphone out and pauses her in-flight entertainment “WHAT?” I say nothing and return to holding the seat in front, unless it is one of these newer planes where they have redesigned the seat and tray configuration so that I can no longer get a good grip…..ahhhh.

The blog has allowed us to discover new places and often step out of what comfort zone did previously exist. We have both found a love for Morocco, and especially Marrakech.  This is always pencilled in a couple of times throughout the year.  There is something about the place which keeps drawing us back.  Our dream is to eventually buy somewhere to live to Marrakech.  We love the Red City and the friendships we have made whilst visiting. Catch up on Sam’s latest posts on Marrakech. 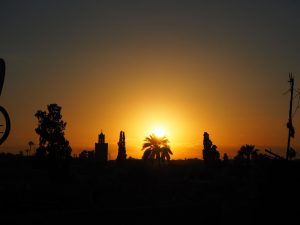 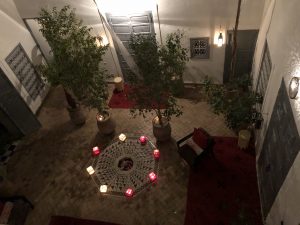 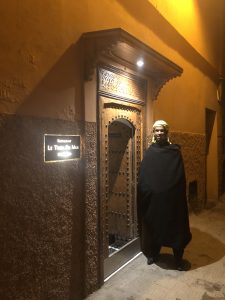 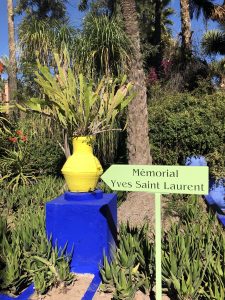 Having just returned from India and a tour of the Golden Triangle I have to say the Dreamliner planes are great, they fly at higher altitudes and often over the top of rough weather, or so it seemed anyway.  Thank you Mr Dreamliner.  With a busy 2018 ahead with trips to Malta, Israel, Fez, Malaga and Marrakech I don’t think I will ever say I enjoy flying and I will no doubt continue my pre, during and post flight rituals.  I hope to start getting involved with more of the blog posts so keep an eye out.  Follow me on social media www.twitter.com/chancetotravel and www.instagram.com/mychancetotravel

If anyone else feels the same about flying or is the partner of a blogger and can relate to my story please feel free to get in touch. If www.easyjet.com want to gift me a fear of flying course I will of course be most grateful as long as they have a seat I can hold on too…