After watching BBC Two’ series on ‘Amazing Hotels- Life Beyond the Lobby’ featuring the Royal Mansour hotel in Marrakech earlier this year it reignited my need to visit this spectacular hotel. As I knew I was returning in September it went on the list of things I wanted to see and do on this upcoming trip!

Fast forward to September and I arrived in Marrakech full of excitement, with a weird sensation of feeling like I had returned home. On my third night there, I suggested to my husband after dinner at Maison Arabe we could go to the Royal Mansour for drinks as it is close by. Maison Arabe was an excellent experience, a blog will follow on my foodie diaries soon. We took a cab a short distance, even though you can walk, the three course dinner had taken its toll! 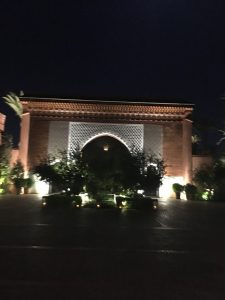 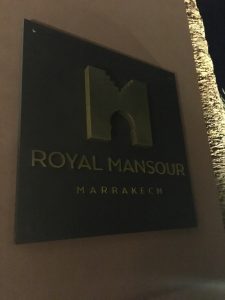 The Royal Mansour Marrakech was created from the owner’s own vision of creating ‘a masterpiece’ that could “exceed the demands of today’s discerning traveller, whilst reflecting the true essence of Moroccan tradition”. Their main aim was to “celebrate architecture, ancestral knowledge and the culinary arts”. To which they have well and truly succeeded in this hotel.

From arrival into the grounds of the Royal Mansour hotel I could see the well manicured gardens and the sense of luxury was evident for all to see. As we pulled up at reception we were greeted by two friendly staff members, I asked if it was ok to have some drinks in the bar area to which the answer was of course. One thing you cant miss is the Royal Mansour’ ‘Great Gate’, which gives a strong presence, inspired by the great gates of Morocco’s imperial cities. A result of local craftsmanship as well as the technique and materials that were used to create it. Like the famous gate ‘Bab el Khemis’ known as Thursday Gate, The Great Gate promises “happiness, wealth and prosperity”. The entrance as you walk into the hotel is simply stunning, the architecture and the attention to detail stand out the most, giving it a romantic yet authentic feel. Before entering the bar area you pass through parts of the hotel, some shops and you could stand in awe as each room is different from the next, in feel, design and colour scheme. 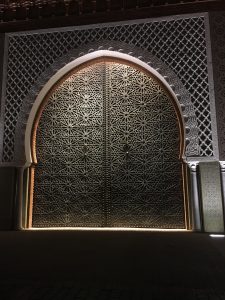 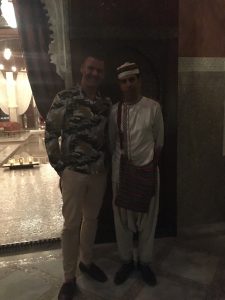 The Royal Mansour bar takes it’s inspiration from the roaring twenties and it is described as “the social heart of the hotel, offering a glamorous vibe”, decorated in the theme of art deco, there are pink gold leaf mirrored walls, a marble cocktail bar and a hand crafted silver carved ceiling! The bar is open to guests and non residents. We mulled over the drinks menu as we sat at the high bar, the drinks choice was wide ranging and there was definitely something for everyone! After choosing our drinks, the barman went to make them and exactly like in the BBC Two programme he moved quickly and silently through a door and returned to serve our drinks with an assortment of nuts, olives and crackers. The drinks were lovely, I ordered a champagne cocktail and my husband had a Gin and Tonic, followed by a Casablanca beer. We decided to sit in the adjoining room which had a red theme and relax a little, nothing seemed to be an issue. The one thing that surprised me was the amount of people coming into the hotel to have a look around, to which there is nothing wrong with. However, when you are entering a hotel with video cameras and constantly snapping pictures of everything in sight whilst other people are showing some respect and restraint, you most definitely have an issue and I was pleasantly surprised with how well the Royal Mansour hotel dealt with this. I myself a travel blogger know the importance of a picture or video but I also feel there is a time and a place, with some subtlety. 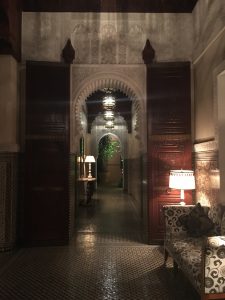 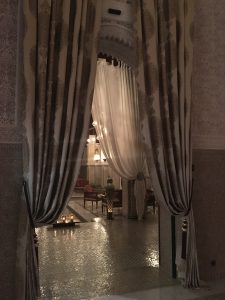 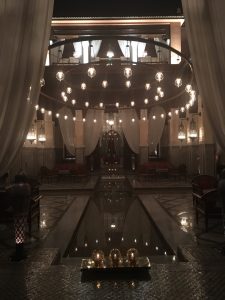 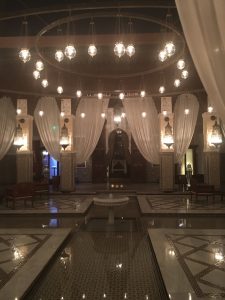 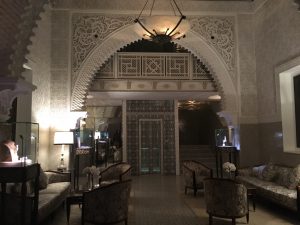 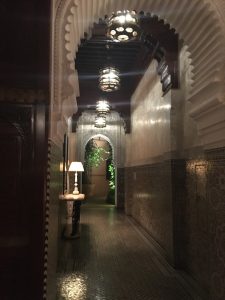 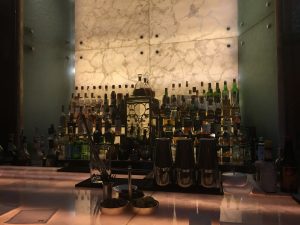 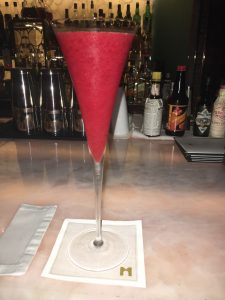 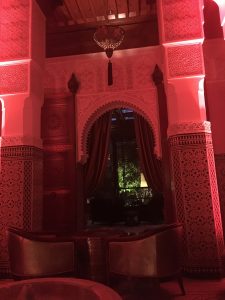 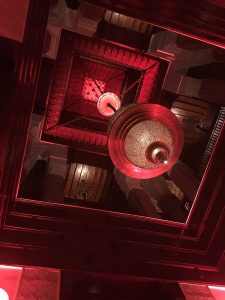 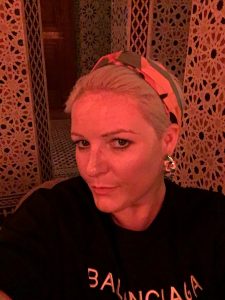 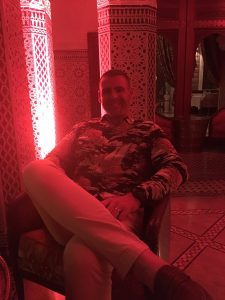 Upon leaving the Royal Mansour we paid the bill which was 800 DHS around £70, which isn’t cheap but it was worth the visit and experience to savour their sumptuous surroundings and you have to remember you are enjoying a drink in one of the world’s best hotels! Don’t hesitate to pay the Royal Mansour a visit. 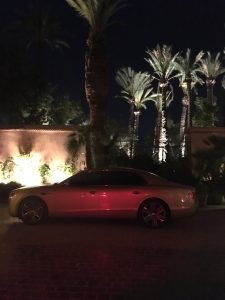 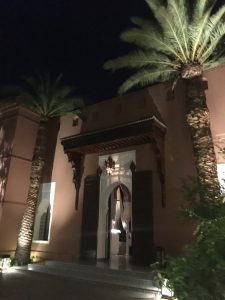