Marrakech has an vast array of hotels, varying in style and opulence all offering high end cocktail and lounge bars. I wanted to check out the infamous La Mamounia Hotel whilst I was in town.

La Mamounia, is a Palace Hotel in Marrakech. Its origins stem back to 1922 and its very name was taken from the surrounding gardens, which were once called “Arset El Mamoun”. This hotel is located on Avenue Bab Jdid and is very central indeed, just a stone’s throw away from the Jeema El Fna and Koutoubia Mosque. Making it the perfect location for sightseeing and exploring the Medina. The hotel boasts luxury accommodation in the form of their elegant rooms, suites, exceptional suites and riads. 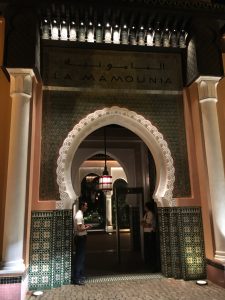 In need of a cocktail, I entered La Mamounia and was instantly in awe. The front entrance leads you up to the hotel through lush gardens, with giant glass candle holders lighting your way. Arriving at the hotels entrance you are met by the staff, meticulously dressed in Moroccan attire offering a welcome photo or two. Guided into the hotel you realise you have not only stepped into luxurious surroundings but a traditional domain. 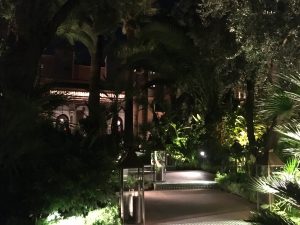 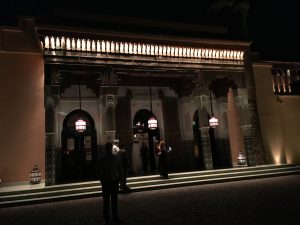 La Mamounia offers “different bars for different vibes”. I chose the outside bar, you walk straight through the hotels reception, pass the shops Dior & Prada (need I say anymore) and through the Le Churchill bar onto the gardens. Once seated I took in the view. Wow! I felt like I was in another country, a cross between the South of France and the Caribbean. Gigantic palm trees were the first thing that struck me, along with the beautifully mesmeric trees that lined the path down to the gardens and other parts of the hotel. 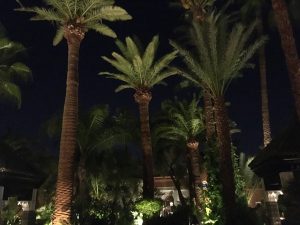 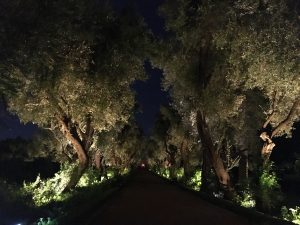 Deciding on which drink was the hardest part, the drinks menu was a cocktail lovers dream. I opted for the Winston Churchill, which seem rather apt as he was once a regular guest at La Mamounia it being his favourite hotel in Marrakech, which included gin, liqueur and champagne. A taste sensation if ever there was one!! Sensibly I sipped it and ate the accompanying olives & nuts. This was followed by a firm favourite as far as I could see, the Aperol Spritz. Refreshing and perfectly made, especially good on a humid evening in Morocco. Price wise as expected La Mamounia is not cheap, each cocktail was 320Dh around £25, although if you have never been, like myself, you should treat yourself as it certainly opens your eyes to another world, a different side to Marrakech that is throughly charming and a one I could get used too. 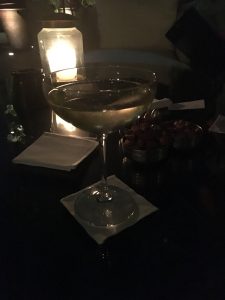 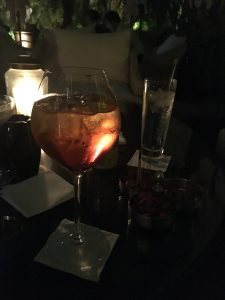 After drinks, I had a wander into the gardens taking in the beauty of La Mamounia’ grounds and as I glanced back I was transfixed by the view of the hotel. Lit up in all its glory, La Mamounia really is a wonder in itself. One day I would love to stay here, but for now I will savour this moment. 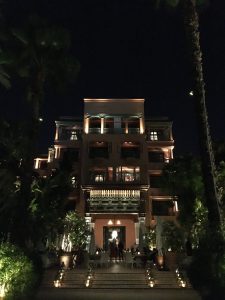 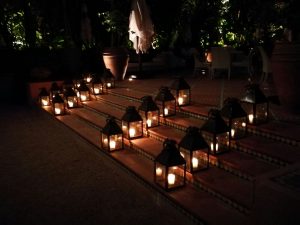 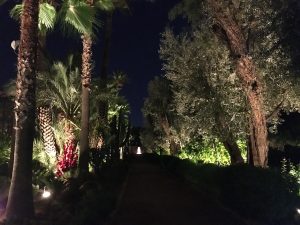 La Mamounia lives up to its reputation in every way. Providing luxury in amazing surroundings. As the late great Winston Churchill quoted “This is a wonderful place, and the hotel one of the best I have ever used.” To which I would have to agree. 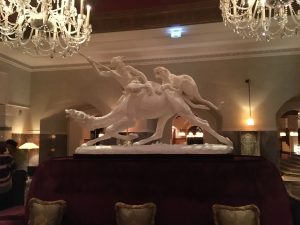 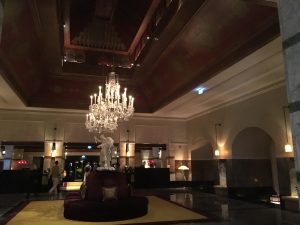 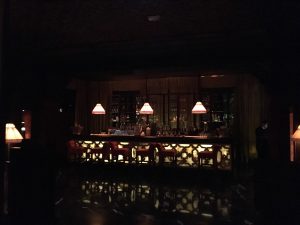